Some things that have happened

It’s been a while since we did a news update, because I am lazy and Dentorm fears writing essays. But things have been happening! We downed some bosses in Blackrock, saw the end of Quizards (we love you, Simon Joyce!), recruited some people, lost some people, lured some people back with our seductive Mongoose ways, experienced Crowy at her noobiest on a Highmaul alt run with her warlock (“oh I should have a pet out!”), finished off all or almost all of the old guild raid achievements and trash talked each other aggressively during our first trial run of the new FM Hearthstone tournament.

We also discussed the best word in the world which has since taken an alarmingly front and centre place in Kilikk’s vocabulary.

Phew! That’s a lot of stuff, but I think we can all agree that one thing has happened most recently to overshadow all other things: Evenstarx has dinged 100! She’s officially all grown up! Behold the highlights of her acceptance speech.

I should also mention that we now have a new officer in guild. Some of you have known Thindra for years now, newer guildies of course excepted, but all you need to know is that she is a Mongoose through and through and will look after you (unless you’re naughty, I wouldn’t cross her if I were you). Thanks Thindra! 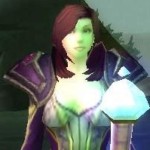